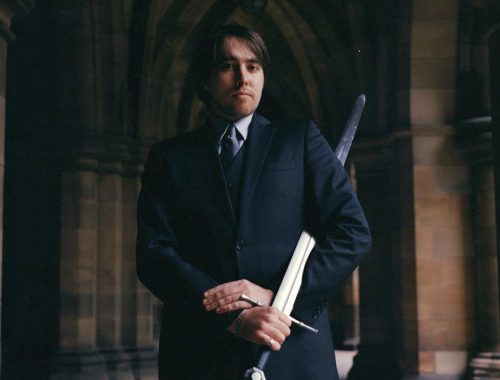 Ben Kerr is the Senior Instructor at the Palm Beach Sword School. Ben has been teaching the Historical European Martial Arts (HEMA) since 2007 and is the cofounder of Scotland’s largest H.E.M.A. school, the Academy of Historical Arts. He holds two masters degrees from the University of Glasgow, focused on the historical training methods of Medieval and Early Modern European combat and is a published author in this field.

Prior to studying H.E.M.A. Ben studied karate in the Ken Shin Kan school of Goju Ryu karate and achieved his black belt under Sensei Maria in 2005.

Ben was born in Glasgow, Scotland, in 1987 and lived there until he came to Florida in 1997. While in Florida he began studying the Historical European Martial Arts alongside traditional Goju Ryu karate. Upon returning to Scotland in 2005, to study at the University of Glasgow, he set up the GUCDS (now GUHAS) to pass on his HEMA knowledge. From the GUCDS he went on to found the Academy of Historical Arts and along with his business partner, Keith Farrell, he worked to make HEMA training more accessible in the UK. Today the AHA represents over 300 HEMA practitioners across the UK and maintains a full time training centre (The Vanguard Centre) in central Glasgow. Upon returning to the US in 2015 Ben began looking to set up HEMA classes in South Florida and got the opportunity to start teaching HEMA at the Palm Beach Karate School.